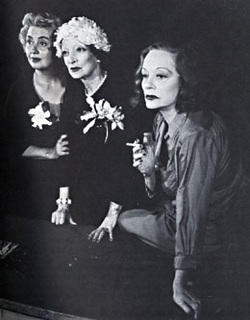 Tallulah plays Daisy, the proprietess of a roadside inn which she shares with a prostitute (Blondell) and a widow (Winwood), who is trying to get Daisy to cremate her husband. The show never reached Broadway and stalled in San Francisco due to poor reviews. Blondell recalled that Tallulah was stoned out of her mind most of the time, but that she was a very generous and caring person. In Los Angeles, Tallulah noticed her old friend Montgomery Clift sitting in the front row and told him "Come back after the show, dahling, I haven't had a decent girls night out in months." Later, she, Clift and Winwood were at a restaurant and both Clift and Tallulah had had way too much to drink. Winwood introduced Clift to a handsome waiter and told the waiter, "This is Mr. Clift, the famous actor. He sucks cocks, you know!" To which Tallulah replied, "Is that so? Well, he never sucked mine, dahling!"

Back to Stage Credits