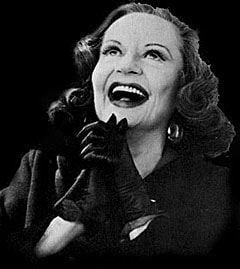 Outrageous, outspoken, and uninhibited are just a few adjectives that described Tallulah Bankhead's personality. Most people who met her never forgot her -and she made sure of that! At the age of fifteen, she stormed out of her home state of Alabama like an April tornado, determined to gain attention and recognition. She did achieve stardom working in virtually every medium - stage, screen, radio and television - but her fame was attributed more to her outrageous antics than for her work.

Possessed of a tremendous energy level, very few people could keep up with her. She smoked over one hundred cigarettes per day, drank gin and bourbon like they were water, and carried a suitcase-full of drugs to help her sleep, stay awake and just function in general. She reportedly engaged in hundreds of affairs with both men and women. Her biting wit, salty language and outlandish behavior – like the propensity for taking off her clothes at the drop of a hat – shocked and outraged everyone.

She was a woman of contradictions. Although her private life could be called anything but conservative, she was highly selective when she chose her professional projects. She highly respected those with common decency and old-fashioned manners, even if she didn't particularly practice them herself. Although she could be very cruel and vindictive when crossed, there are many accounts of her kindness. Her generosity to those in need is legendary, including her love of animals and children (she was a foster parent to many underprivileged youngsters). She claimed to be broke most of her life and, indeed, spent money wildly. Secretly, however, she was a shrewd businesswoman and when she died, her estate was valued at almost $2 million.

This web site features a biography, galleries, profiles of her plays and films, television and radio listings, quotes, anecdotes and more! I hope you enjoy it and thanks for visiting!