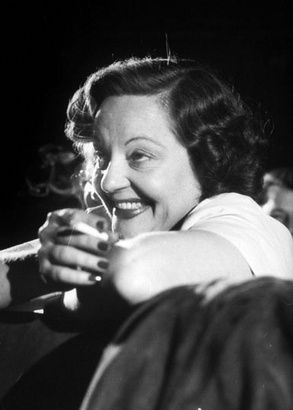 "I'm as pure as the driven slush"

"Nobody can be exactly like me. Sometimes even I have trouble doing it."

"It's the good girls who keep the diaries. The bad girls never have the time."

" I've tried several varieties of sex. The conventional position makes me claustrophobic and the others give me a stiff neck or lockjaw."

"If I had my life to live over again, I'd make the same mistakes, only sooner."

"Cocaine, habit forming? Of course not! I ought to know, I've been doing it for years."

(On seeing a former lover after many years) "I thought I told you to wait in the car."

"I'll come and make love to you at five o'clock. If I'm late start without me. "

"My father warned me about men and booze but he never said anything about women and cocaine."

(On why she called everyone dahling) "Because all my life I've been terrible at remembering people's names. Once I introduced a friend as "Martini". Her name was actually "Olive".

"If you really want to help the American theater, don't be an actress dahling. Be an audience."

"It is one of the tragic ironies of the theater that only one man in it can count on steady work - the night watchman."