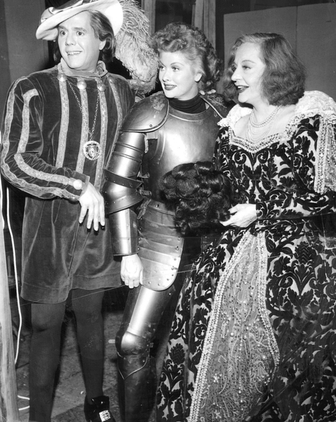 With Desi Arnaz and Lucille Ball on "The Lucille Ball-Desi Arnaz Comedy Hour" (1957)
Although Tallulah often made fun of television on her radio program The Big Show, she soon succumbed to the new medium when lucrative offers began to pour in. Her most famous TV appearance has to be when she guest-starred on The Lucy-Desi Comedy Hour (right).

All Star Revue (NBC, 1952-53) - Tallulah hosted this variety show for one season, alternating with other guest hosts.

The Martha Raye Show (NBC, Sept. 20, 1955) - Tallulah appeared in a sketch with Martha and Rocky Graziano.

The Lucille Ball-Desi Arnaz Comedy Hour (CBS, Dec. 3, 1957) - Tallulah appeared as herself in The Celebrity Next Door (for more information, see Biography).

The General Electric Theatre (CBS, Dec. 8, 1957) - Tallulah starred in Eyes of a Stranger.

For a complete list of television credits, see Tallulah Bankhead: A Bio-Bibliography by Jeffrey Carrier.