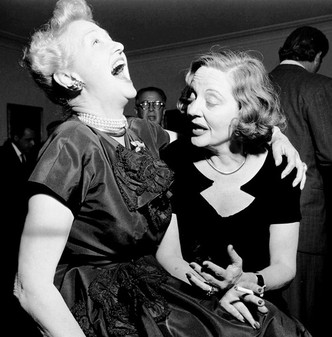 With Hedda Hopper
There was the time she was in Washington for a Democratic Convention honoring her "divine friend, Adlai Stevenson"... And during a long speech by some senator she had to go to the john, but found when she was settled in for the duration that there was no toilet paper at hand. "So I looked down and saw a pair of feet in the next stall. I knocked very politely and said: 'Excuse me, dahling, I don't have any toilet paper. Do you?' And this very proper Yankee voice said: 'No, I don't.' Well, dahling, I had to get back to the podium for Adlai's speech, so I asked her, very politely you understand, 'Excuse me dahling, but do you have any Kleenex?' And this now quite chilly voice said: 'No, I don't.' So I said: 'Well then, dahling, do you happen to have two fives for a ten?'" (from People Will Talk by John Kobal)

Oh a trip to Europe during the early 1930s, Hollywood heartthrob Gary Cooper showed up in Rome and promptly had an affair with Countess Dorothy Di Frasso, the American-born daughter of New Jersey millionaire Bertrand Taylor. When Cooper returned to Hollywood to begin a new picture, the countess followed. The actor spent several weeks playing around with di Frasso and her fast crowd, setting Hollywood gossips buzzing. Friends soon noticed that Coop was losing weight and looked more than a bit wilted. As work on his picture progressed, Cooper's condition grew steadily worse, and he finally consulted a doctor, who prescribed rest. A short time later Tallulah Bankhead attended a party in Santa Barbara and was asked why she thought Coop hadn't arrived yet. "He's probably worn to a frasso," Tallulah responded. (from Hollywood Anecdotes by Paul F. Boller, Jr..)

Ted (Ted Hook, one of Tallulah's caddies) was afraid to leave her. One night, after a few hours out, he returned to the town house and smelled smoke. He rushed into Tallulah's bedroom. Doloras, the Maltese that ordinarily slept above Tallulah's head, was on fire like some flaming halo. Tallulah had apparently just fallen asleep, after flicking her ashes onto the sleeping dog. Ted now rushed into the bathroom for water, yelling, "Tallulah, Doloras is on fire!"
She awakened. "What is it?"
"Tallulah, Doloras is on fire!"
"Well, for chrissakes, put her out," she said and went back to sleep. (from Miss Tallulah Bankhead by Lee Israel)

Wilted by the heat, the whole party moved to a cooler house nearby, where the hostess, offering them bathing suits, invited them down for a swim in her pool. "I never wear a suit," declared Tallulah, who, good to her word, was soon standing on the diving board dressed in nothing but her pearls... it was a typical Tallulah scene, down to the fact that her chauffeur had to go back later and fish the pearls out of the water. When I asked her why she did it, she said, "I just wanted to prove that I was a natural ash blonde." (from Capote: A Biography by Gerald Clarke)

We stopped at a roadside cafe for Cokes. Inside, we sat at one of the few tables and ordered. Then, an old man, who was sitting across the room, came slowly over to us, peered at Tallulah, and asked, "Are you Edna St. Vincent Millay?" Startled, Tallulah said, "No, but I am someone terribly famous. Here, I'll write my name on this slip of paper, and, after we've gone, open it, and you'll see. Meanwhile, my friend here, Colin Keith-Johnston, will recite for you. Colin, this gentlemen is thirsting for poetry - recite for him!" And Colin did recite "At a Month's End" by Sindburne, beautifully and in a most matter-of-fact way, as though the setting and the audience were not that unusual. We finished our Cokes, Colin finished the Swinburne, we paid the check and left. As we boarded the bus and looked back, the screen door of the little cafe opened, and the old man, waving the slip of paper Tallulah had given him, called, "Good-bye! Good-bye! Ella Wheeler Wilcox!" (from Tallulah: A Memory by Eugenia Rawls)

The greatest performance I have ever seen was given by Tallulah Bankhead in the test she made for Amanda in The Glass Menagerie. Karl Freund photographed the test. He cried. She was that woman! She had promised not to drink; she could not keep her promise. Jack Warner said 'Errol Flynn is enough.' It cost a fortune to do an Errol Flynn picture because he was always drunk. And thanks to Errol Flynn, Tallulah lost the part. (Irving Rapper in Movie Talk: Who Said What About Whom In The Movies by David Shipman)

Tallulah Bankhead told a friend that her doctor had advised her to eat an apple every time she had the urge to drink. She arched an eyebrow and added, "But really, dahlings, sixty apples a day!" (from The Hollywood Reporter by Tichi Wilkerson)

The Canadian artist Charles Redfern was visiting Windows on the day that Tallulah was interviewing Sylvester Oglesby in regard to the job (as a cook), and he subsequently wrote a letter to Tallulah from abroad; in it, his mimicry of her is to the life: " I picture you every day at Windows and often wonder how Sylvester the butler worked out. That interview I'll never forget. It began with his asking what the hours would be, and your reply (and this is considerably shortened) was, 'Well, darling, I live a very quiet life in the country and I can't say it's any different from any other country place, except that people do come and go and never get up early so that part of the day, darling, isn't difficult. What are you drinking, bourbon? Dinner is different, naturally we do sit down unless of course the Giants are playing and no one can move if there's a game on but it never last forever and we're never more than six for dinner because you see my table is oval and won't seat any more unless of course we have a buffet which is generally on Sunday and then any number of people can eat which, of course, they never do if it's hot because the pool is cooler d'you know, darling, and if supper is cold it doesn't matter anyway and I have a bird that says who are you and laughs just like me and Gaylord my parakeet who drinks champagne, don't you, darling, and I like a hot bath in the morning around three in the afternoon and breakfast on a tray, does your wife know how to make vichyssoise?'" (from Tallulah by Brendan Gill)