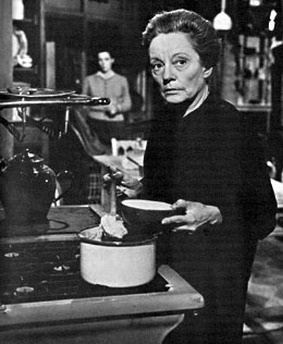 By the mid 60's, Tallulah's health was in decline and she finally realized that the physical demands of appearing on stage were too much for her. While visiting her friend Dola Cavendish in Vancouver in early 1964, she received the script for Fanatic, a horror film about a religious zealot who holds her dead son's fiancé hostage in her attic. The movie was to be filmed in England and Dola enthusiastically urged Tallulah to take the role. Tallulah reluctantly agreed after seeing that many older actresses, like Joan Crawford and Bette Davis, were appearing in similar films.

Fanatic was filmed during the summer of 1964 and there were no major incidents. Tallulah got along with her director for a change and she was even polite to Stefanie Powers, who played the fiancé. She tried to tone down her drinking during the filming and played poker and gambled on horses during her breaks. She was distressed and pitched a huge fit, however, when she learned that the title for the American release of the film would be Die! Die! My Darling! She thought the title was ridiculous and that they were trying to capitalize on her favorite expression but there was really nothing she could do about it. 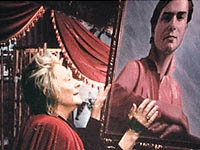 The film was released in the U.S. in May of 1965 to mild reviews. Much to Tallulah's annoyance, many critics commented on her severe appearance. She wore no make-up, her hair was dyed gray and pulled back in a bun and there were many harsh, unflattering close-ups. Before the film was released, it was shown to Tallulah and a small audience of her friends. After her first scene, she stood up and told everyone, "Dahlings, I must apologize for looking older than God's wet nurse."

Die! Die! My Darling! is a hoot to watch. The role had to have been 180 degrees from Tallulah herself, but she pulls off the role flawlessly. She delivers Bible verses in her sonorous voice in a rapid-fire manner. Her double takes, as in response to Powers appearing in red dress and red lipstick, are hilarious. It was Tallulah's only appearance in a color film and she is practically unrecognizable except for her distinctive voice, which gives her away.

Back to Film Credits 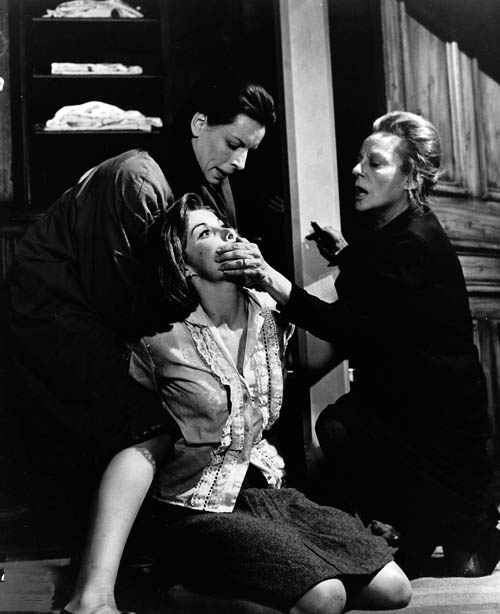 With Yootha Joyce and Stefanie Powers